As I’m writing this, I can’t help but think, WHY DID I NOT TAKE A PHOTO???? More on that later.

We started our trek from Lugazi (noted in red on map) and headed up to Gulu located in the northern part of Uganda. We were told that it is approx 4 to 5 hours away… Well, not exactly. We started off early enough and made it from Lugazi to Kampala in good time 2 hours not bad…… Now the fun starts…

Once we hit Kampala, we encounter a traffic Jam. It must have been the beginning of Road construction season. What should have took at a max 1 hour to make it to the other side of the city took 2.5 hours. One lane roads, detours way way way around the city to get to the north part. They are building a major freeway in anticipation of the 2010 World Cup Football (Soccer) tournament that will be held in Uganda. It will take you right up to the stadium! Until then, you have to drive around the city!

Once we got on the ONLY paved or sealed gravel road that heads North, we were a cruzing. It was as if we made up time as we drove 80 kmph… (I think that’s about 55 miles per hour!) We did that for just a few minutes then we encountered something we are all fimiliar with… POT HOLES… Our driver Ignasis has eagle eyes, he could see them coming for miles! The bus moved to the right, then to the left then to the right… Slowed down to go “through” the ones that could swallow the bus. But we made it. After a few hours of this, we stopped at a little roadside cafe to use the toilets (not bathrooms.. that’s asking for a shower) and eat a late lunch.

Lunch on the move is delightful.. Hard Boiled Eggs, a Chapti’s (all familiar Roti’s), peanut butter smeared on anything you can smear it on… And Orange Fanta or Coke… They also have a very lovely Ginger soda Stoney’s. Which I like, but if you are not use to ginger, it makes you cough when you take the last sip! After a short break off we went…..

After about 20 minutes of smooth sailing, it was more road construction. Now that does not sound so exciting, except, this was the most interesting road construction tactic I’ve ever seen. Some of the roads were rebuilt to make the rides smooth and the gravel was put down and was loose. A layer of ashphalt does not go over the top, rather a “seal coat” (similar to what we seal MN driveways with) is put down. BUT that takes a while and it is only one side at a time. So they figure let’s lay the gravel down say for all but the last 20 miles to Gulu and let’s put speed humps every 8 meters (approx every 25-30 feet). AND let’s make these speed humps BIG so that a truck, bus, car literlally needs to drive over them at 1 mph. No kidding. I honestly don’t know how Ignasis managed it. He’d just get up to 20 kmph to shift gears up, and then slow down. Front tires over first, back tires over. And behind the axel if it was too fast, well it was a thrill ride. This is where I should have taken a photo. This went on for miles and miles.

Ignasis and I started to laugh as we encountered one after another after another. It was “never ending”. That was the last 7 hours of our drive. What should have taken 4-5 hours took 14 hours. Riding in the bus was extremely long, but none the less, we got there! And it WAS WORTH IT! 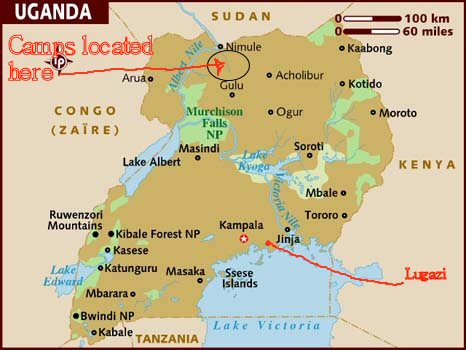