Our Journey up to the N. Coast of Ireland had us stopping at places and I realized that I really had no comprehension of what Ireland looked like. Beauty in it’s simplest form – by nature. I tried my best to capture the vastness of this island via my camera. I just could not do it. Reminds me of the Grand Canyon… you know it’s big but the vastness of it is not understood until one stands on the rim and looks over and down yonder.

Our dirve up was on narrow roads. On a few occasions, we had other vehicals but mainly sheep on the road to negoiate. I use to laugh at the movies and these little cars that were shown in the movies. I now see the purpose. It is not for a laugh, literally, the roads follow the sheep or cow “paths” and remain narrow. It is the narrowness of the roads that lends a charm and feeling of a “Sunday drive”… wait a minute… Today is Sunday, and we’re driving! Ummmmm…

One of our prayer stops on this spectacular day is a place called North Antrim Coastal Path.
There, one will find a tourist attraction the Carrick-a-Rede Rope Bridge. The bridge is a rope suspension bridge near Ballintoy, County Antrim, Northern Ireland. The bridge links the mainland to the tiny Carrick Island.

The tourist attraction suggests folks:
Take the exhilarating rope bridge to Carrick-a-Rede island and enjoy a truly clifftop experience. This 30-metre deep and 20-metre wide chasm is traversed by a rope bridge traditionally erected by salmon fishermen. Visitors bold enough to cross to the rocky island are rewarded with fantastic views. Note: maximum of eight people on bridge at once. Suitable clothing and footwear recommended.

We did steps… 360 of them and the took the bridge to the tiny island. It was a place where, on a clear day, you could see across to the Hebrides Islands of Scotland. Well, it just so happened that it was a clear day. So behold, I could see Scotland. That may not seem like a big deal, but we were told that it had been raining there every day for months. Really, we had perfect weather. Sunny and blue! Thank you Lord.

We had prayer time there and I was just thanking the Lord for this trip. It was truly a gift to me.. And I was thanking Him for sending me to such a magnificent place.

Map of the walk to the island of Carrick…. 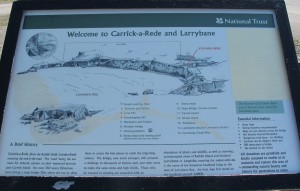 Behold… the blueness of the ocean. For some reason I had thought these colors were reserved for my “tropical” destinations. 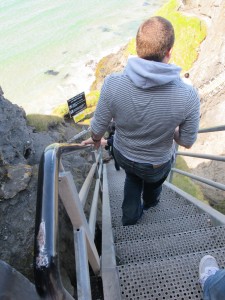 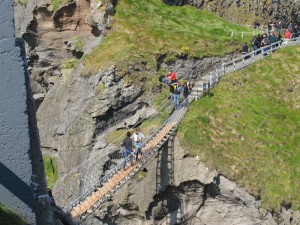