Tonight was the kickoff of the 3 day crusade. A tent was set up along the river on church property that about a mile from the main church. The property will eventually have an orphanage and school set up. There are rice fields that line the property and water buffalo being raised for milk. Pastor John shared with us that as a young boy growing up, he would see the rice mill tower from any point in the city as it was the tallest structure in the village. And now, the Church owns the property ~ Glory to God!

When we arrived, there was between 1000-1500 people singing praise and worship songs in Telugu. Pastor John told us that the crowd would grow as the days progressed. There was just a few rows of chairs set up in the back of the tent, most sat on the ground. Three big bullhorn speakers put up out in front of the property facing the village. The message was not only to be heard by those under the tent, but to be heard by all. Proclaim the message of the Good News by transmitting it to all.

A Indian pastor started off the service followed a message shared by Pastor Ken, a Pastor from Wisconsin. For him, it was the first time he had used an interpreter, so it took a bit of getting use to knowing when to pause. I just kept praying for him and the Lord to touch the hearts of those who heard the message. As the service went on, many people were drawn to the property, standing by the side of the road listening to all that was being said. There were also two more Indian Pastors who shared after Pastor Ken. The entire team was getting tired ~ jet lag. It was catching up with usâ€¦â€¦Pastor John suggested that we turn in for the night. That was a good idea. 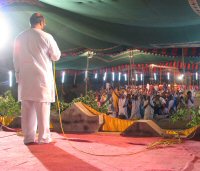 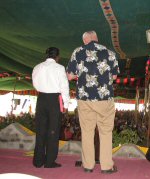