We leave the hotel at 8:30am to board our flight that will take us to Vijayawada. Pastor John tells us that they recently opened up an airport closer to Mandapeta, but the cost of fly into the Rajahmundry airport was way too expensive. Humor is that we actually land in Rajahmundry but are not allowed to get off. We continue on to Vijayawada and then take a 2 1/2 hour car ride back to Mandapeta.

I am asked if I wanted to ride shotgun in the SUV. I said sure. A few people laughed when I agreed. One good thing is that I’m broken into riding in countries that have unique driving rules. One of my missionary rules is : don’t flinch, make gasping noises or give driving instructions, just sit and enjoy the ride ~ knowing that the skill and boldness it takes to drive is something that is learned by active participation and it is not yours.

After a bit I figured out what is the most important part of the vehicle wasâ€¦. The Horn. Pastor John said that you buy a horn and they thrown in a car for free.
One of the roads we were taking was for a long stretch was a 4 lane divided highway, two lanes going both ways, but funny thing is it was more like a 2 lane highway. Cars, overloaded trucks, tractors, rickshaws and oxen carts, did not pay attention to the divides. They just drove at you every which way. So really, there were two sides of 2 lane highways. Ummmmm…. that’s a new one. To pass, it is one massive game of chickenâ€¦. You approach a vehicle and then honk your horn (trucks actually have it painted on). While passing, if there is a vehicle coming at you, you see who backs off first. Honking all the while at the person you approach. This again, is a country where they could save millions of dollars by not painting stripes. Oh yes, let’s not forget BulaMaCow! Cows are sacred here so they just roam all over the place….. along with heards of Waterbuffalo….. Watching out for vehicles is just one part… you’ve got livestock too! 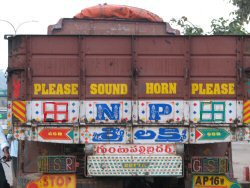 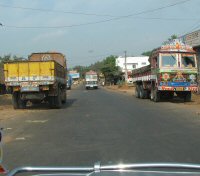 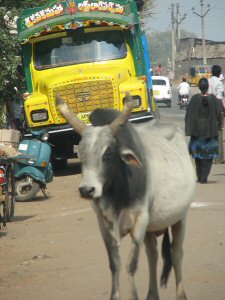