One last meal ~ this time they asked us to eat instead of serve. We obliged. Lunch Menu: Rice, Chili Chicken Curry and Samba all on a banana leaf. I was looking forward to this culinary adventure. As I started to eat, I thought an angel had taken a coal from heaven and touched my lips ~ Whoa ~Hot hot hot!!!! Pastor Paul laughed and called for more rice. He taught me to eat just plain rice to cut the heat. It was all good! Just intense heat!!!!!!! Did I mention eating here is done with out silverware, Samba is interesting to eat without a spoon 🙂

All of the above is cooked in big caldrons over open fires on a back part of the property. Now that is a pot of rice!

Today’s service is a special one, there will be a water baptism in the canal. 78 people are to be baptized ~ it is their outward commitment to go all out for Christ. It was shared that when they receive Jesus as Lord, many families tolerate it as He’s just “another” god to them. No big deal and others really don’t know about it. But when an individual gets water baptized, they are put out. The baptism takes place publicly and the entire village knows. It is the declaration saying they will only follow One True God ~ Jesus and are no longer following the way of Hinduism. This is really the dividing line and individuals are disowned.

I have never been to a water baptism like this before. Pastor John taught about the meaning and the importance. Then all of the 3000+ people walked down to the canal ~ about a ½ mile or so ~ singing hymns and songs all the way there. It was definitely known by the village what was going on. People lined the Canal to watch the event. We were asked to pray for individuals once they came out of the water. It was beautiful and such an honor to be a part of such a special day! One I will always remember. 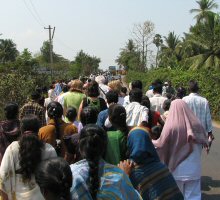 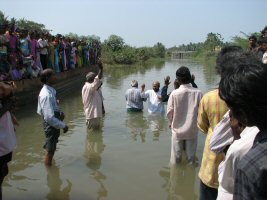 Pastor Jaya Sastry, (** Jaya is what I will call him as I can not pronounce or spell his first name), was a former High Hindu priest. His name means Overcoming Darkness and Studier of the Scrolls. As he has preached, I listened intently, fascinated by what he has shared. Tonight, Jaya is sharing his testimony. Much of it is enlightenment into the Hindu priesthood. Jaya was born a high priest as it is his linage (like the Levitical priesthood).

As he grew and participated in the ceremonies they are required to do, he started to ask questions about what the priests were actually saying. His father told him that he did not need to worry about the words, just repeat them. Jaya was not satisfied with that answer and began his search. Eventually, Jaya discovered the meaning of the “holy words” the Hindu priests were repeating: There is only one God (true) Only God can make a way for man to approach him (true) There is only One Anointed (again true) Whoa!!!!! Jaya was confused as in Hinduism there are over 300 million gods. Yet, here the scriptures were saying there was only One….

In the course of his search and studies, he had met a Christian. They often studied together and had some fellowship. On one visit to the Christian’s house, he asked the question: Who is your God? Jesus was the answer. He also asked the maid Who her God was? Jesus was the answer. When Jaya returned home, he asked his mother, who is your god? She gave him an answer. Then Jaya asked his older brother and he gave another god, then his younger brother, still another god. His sister too, and yet, she had another god. Finally he asked his father, who is your god? His father added another god to the ones that were already given.

Further confused, Jaya drove to a town where there were 3 churches: An Baptist church, Penticostal and a Zionist church all near each other. He walked in to the first one and asked Who is your God? Jesus was the answer. He then went to the second one with the same question and was given the same answer Jesus. When he asked the last church and received the same answer, Jesus, Jaya decided that if three churches that were not the same and the scriptures were saying that there was only oneâ€¦ Then Jesus must be it. He asked Jesus to be his Lord and Savior.

By doing so, he left the Hindu priesthood and his family put him out. He shared that the temple blessings by the priests are just to make money so with him leaving, he now had no source of income. No income, provision, family or place to stay is how Jaya started to follow Jesus. Through a moving song, Jaya expressed his thankfulness to the Lord for taking care of him over the past 10 years. For the Lord brought him income, provisions, places to stay and a new family. My words can not describe how the Holy Spirit moved. There was an electric intensification as the Holy Spirit touched the people. It was one powerful alter call as the people cried out for Jesus to be Lord. I was honored to hear his testimony and support him in prayer for the multitudes that made decisions for Christ that night. Thank you Lord for allowing me to be a part of this night!

Feeding the multitudes again. WOW! The number of people in attending has grown even more. There are at least 4000+ people here today. Pastor John and I talk about how special this is ~ to serve the people food for their bodies and also spirit. It is truly an honor!!! As we were waiting to serve, I felt someone was touching the hem of my skirt. As I turned and looked, here was an older woman whose eyes met mine. She lowered her glance as I realized she was wanting prayer ~ for what, I don’t know, the Lord does and I believe he met her needs right there as she reached out in faith.

Off we go to serve the food. Lunch menu today was similar: Rice, Chicken Curry, and Samba all on a banana leaf. Here we go ~ I’m getting quicker, but the more seasoned workers (Indian) are still way faster than I am. I’ll get there!

The crowd is growing and at least 3000 people are here for the last service Monday night.
Martha shares about meditation of your heart. It is a wonderful message. Two Indian pastors follow, each with a message. At the end of the service, we are asked to pray for the people. The team (all 8 of us) lined up in front of the stage. The Indian Pastors create a “human chain” to separate us from the people. At least they tried. Crowd control was an issue as the people came forward. The pastors did their best to just let a few through at a time so we were not completely mobbed. WOW! The multitudes were now coming to have prayer from us. I don’t know how many people we actually prayed for, but I know I had not laid hands on that many people in my life. The Spirit of the Lord filled the children with joy as laughter poured forth. A young girl who suffered from polio had an arm straighten out as we prayed. Glory to God the people were being touched by the Lord!!!
We did this to end all the night services and it was to say the least ~ wow. I had not layed hands and prayed for so many people like this before. It shows the importance of all of us doing what we are called to do ~ One can not do it alone.